Aspen and the Bermuda Zoological Society 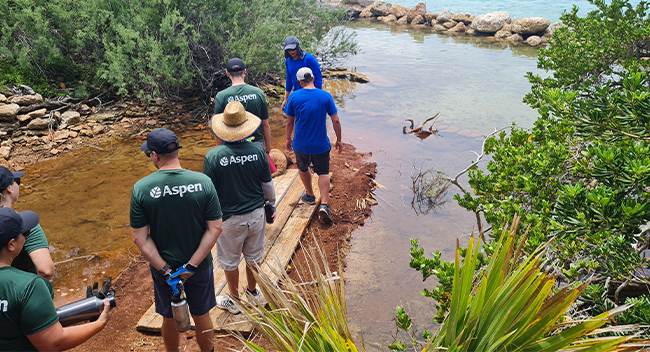 The Aspen Bermuda office is committed to a five-year, $25,000-per-year partnership with the Bermuda Zoological Society (BZS) to establish a Red Coastal Mangrove exhibit on Trunk Island. In June 2022, the office was instrumental in developing the first phase of the mangrove reforestation.

To be successful, the mangrove reforestation project must work closely with the community. As part of Aspen’s 20th Anniversary celebration, 17 employees, led by Aspen Bermuda Ltd. CEO Mark Pickering, took part in a volunteer event on Trunk Island. The team helped to plantmangroves to raise community awareness of the ecosystem and habitat protection, so they were happy and willing to get to work despite the hot and muddy conditions!

The group first reinforced the mangrove habitat with recycled, biodegradable burlap bags filled with rich, red soil. The weighted bags lined the edges of the bay to act as an erosion-resistant barrier while doubling as a growing medium for younger plants. Next, it was time to plant the first mangrove propagules – green bean-looking seeds that had been floating in water until taking root, and then planted on site.

Most recently, the BZS set up a nursery garden for seedlings. Volunteer groups will learn how to collect and select seeds from existing mangroves, collect mangrove propagules from the field, cultivate them to generate new shoots and then transplant them to the planting site.

All in all, the Aspen Bermuda team enjoyed contributing to mangrove research, conservation and habitat management as well as participating in the reforestation process. Colin Brown, BZS President, believes the success of mangrove restoration depends heavily on engagement with partners, like Aspen. Colin believes that, in the years to come, a walkthrough the Aspen Coastal Red Mangrove Exhibit will allow their team to provide new, educational experiences for future students and visitors to Trunk Island.